George Dillman requests Sensei Coffman to become his teacher and to take over teaching his classes in Washington, D.C.

Sensei Coffman joins USKA and becomes State Representative and head advisor for the Okinawan Shorin-Ryu system. (Note: Robert Trais was the head of the USKA) 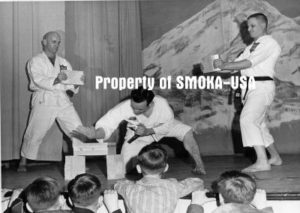 Gary Saluter Okinawa 1966-69
Studied under Nakamura Sensei, Okinawan Kempo. Gary was a marine that became the top student (American) within his dojo, rotated back to the States as a Yon-Dan. Gary was a very good fighter as well as a good technician and weapons instructor. Gary became a student of mine in 1966-69, reached Go-Dan.

George Dillman
George was the first peron that I refused to teach and put out of our system of Karate. George started training under me in 1966. George was a lieutenant in the Army National Guard teaching a karate studio @ the DC National Guard Armory. Wearing a Black belt and claiming the rank of Sho-Dan from Mr. Harry Smith, Allentown Pa., when we first met. I found out later that Harry Smith had not promoted George Dillman to the Black belt level (at one of Jhon Rhees tournament in 1967 or 1968), whereas Harry came up to George and I and grabbed George’s belt saying “where did you get this”. After that plus other unethical things that George did and is known for, once I found out about, I refused to continue as his teacher. George likes to claim instructors that he has not in fact trained with, plus other things that are not true just to further his name. Every teacher that I know of that has taught George Dillman has put him out and refused to continue being his teacher because of his lying and exploiting.