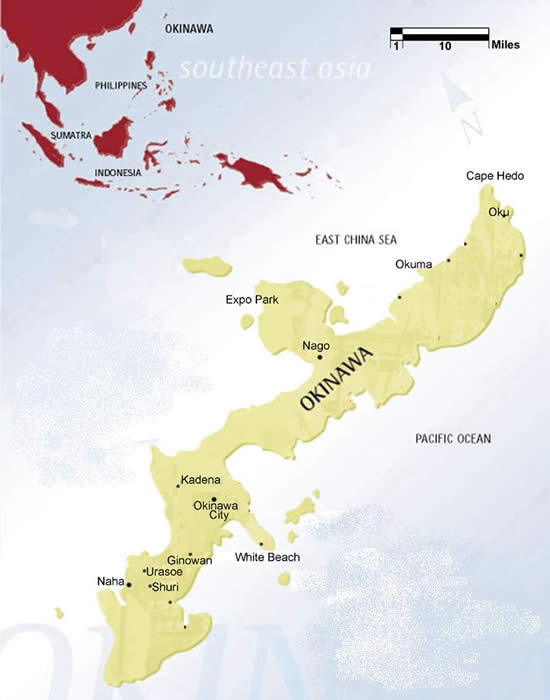 Al Gagne (dojo’s in the Rhode Island and Florida areas) who is one of “SMOKA-USA” members, and one of my students, and I just returned from a trip to Okinawa, Japan, November 12th, 2003.

The weather was good with the exception of one and a half days of light to heavy rain.

Our purpose for the trip was to visit Sensei Kise and to have Al see the birthplace of our style of karate “Matsumura seito”.

First let me give you a little back ground; Al and myself (Jimmy Coffman) started trying to contact Fusei Kise and his son Isao, plus their Association, months before the trip to no avail. We tried to reach Kise through his Internet site, as well as by local mail directly to Kise…..No response from either after repeated tries. We decided to make the trip anyway.

My last trip had been in 1994 to also visit Kise. That trip was made by Ed Marucci (my senior student) and myself, and turned out to be quite pleasurable.

In 1994 we had arrived around the same time of year, where Kise will most likely be there during the whole month of November. In any case we arrived and called Kise. We met at his dojo located in Okinawa City, formerly known as Koza City. We went through the normal greetings, things went well, and next we presented him with $750 in cash as a gift. That night we then took him to his bar of choice and spent another $350. So here we have spent over a Thousand dollars (US) in a matter of hours. Things could not have been better; Kise is warm and happy with his $750 cash stuffed in his pocket. (Money, Money)

Now this year, we once again arrive and contact Kise. He states he is busy for the next few days, so we do the Okinawan tourist thing, visiting the castles etc. which is also a very nice experience.

During one of our visits, at the “First Chinese settlement on Okinawa“, Naha area, I excuse myself to go off to the men’s room. Kise and a lady friend walk in the entrance. Al Gagne recognizes him, goes up to Sensei Kise bows, pays the proper respect and then states that he is one of Sensei Jimmy Coffman’s student black belts. Kise says “where is Jimmy Coffman?” Al states that he is in the men’s room and will be right back. Kise says he will be right up the path. I come out of the rest room two minutes later. Al informs me that Kise is in fact here, and has gone up the pathway. I tell Al that we will wait at the exit for him, so that we will not disturb his sight seeing. Now, there is only one way in, which is also the only way out. There is a wall built around the whole complex. So we wait, and wait, no Kise. We waited over an hour. When we started to see people that had come in well after Kise, and leave, we gave up. Kise must have turned around and left right away.

Well, we finally get to hook up with Kise. One of his students, a Mrs. Sayoko picks us up at our hotel and takes us to Camp Foster, a marine base. We meet Kise about 11 am and he does all but ignore us. He does not shake our hands, does not greet us in any way whatsoever, just as though we were not there at all.

Now one would think that one would be pleased, if not honored, to have two people travel “Nine Thousand miles” and spend all of that money just to come and see you.

We had brought expensive gifts from America to be presented to both Kise and Isao as a token of respect and friendship.

During the whole meeting I repeatedly asked Mrs. Sayoko to explain to Kise that I wanted nothing from him, I just wanted his friendship as a former student, as I had stated back in 1994. Kise would not even direct his comments to us, only to Mrs. Sayoko. I next asked Sayoko to ask Kise to simply state that if he did not want any contact whatsoever from me to just say so! If in fact that was how he felt. No response from Kise, he just short of blew it off, stating he was now an “Old man” (68) and wanted no conflict, he was retiring and that Isao was making all the decisions now. Kise stated that Isao was teaching “sport karate” and he was teaching traditional karate. Stating that any decisions would have to come from Isao. I stated that I was happy with staying the rank I hold for the rest of my life, but wanted a means for my students to go as high or higher than I. Sayoko said that we, Kise, Isao, Jerry and herself would meet after Isao’s class on Tuesday and discuss how to work this out. Kise said he had a class and had to leave, once again not giving us the time of day. Sayoko said we should call her at 6pm to get the exact time for the meeting.

We called a couple of times and finally we were told that they wanted to meet tonight (Monday) at 9pm. At 9:45 pm they came in as we waited in the hotel lobby. When I say they: I mean, Jerry (student of Kise that handles the Non-Okinawans for Isao’s association.) Sayoko and her husband.

No sign of Kise, No sign of Isao! No way to direct our questions directly to Kise, Isao.

The meeting went like this; Jerry starts out by saying; “so you’re going to retire?“ I say “No I’m not, at least for a long while.” Jerry then states that Isao says you have your own association and he sees no need to join our groups together. He wishes you well, thanks but no thanks, in so many words.

Now I see how the meeting is going to go, so I give them the back ground on what has happened in the past. i.e.: Kise setting in a car at a Colorado seminar for one and a half hours refusing to get out until I leave, calling the police. Greg calling the police each and every time I went to New Hampshire to see Kise, etc. etc.

Sayoko asks me how do I promote my students? I give out my own certificates, stating that I have been a 7th degree under/from Kise/Soken since 1977 (of which Sayoko asked Kise and he stated yes during our meeting at Camp Foster) and also having a license to teach the system since 1964 from both Soken and Kise, that is how I promote my students. Next I give an example that he has promoted Greg Lazarus (N.H.) to the same rank, 7th Dan, and that he did not even start karate until 1978, plus his first instructor up to Sho-Dan was in-fact Al Gagne sitting right here. Also I do not have a Black belt under me that cannot beat Greg.

Jerry states that he thinks Greg is good, stating his kata looks almost like that of Kise, plus his change of body is good. I ask Jerry if he has ever sparred Greg or even seen Greg fight? He stated no. I asked if he has ever worked with Greg, again he states he has only seen him do kata and some change of body. (where no one is really trying to hit one another, because that is how they train).

Jerry states he does not know what has happened in the past. He then states that Isao is, Quote: Building the association from the inside out, whatever that means? and that they are not looking for more members. Of which I took to mean…at least not our group. Ha.

Jerry than stated that people think Kise is only teaching “Sport Karate” now, that is not true he states. Jerry says we are taught traditional karate first and than taught sport karate. Now wouldn’t you think it would be the other way around? Teach the new students sport first, than after they have proved themselves teach them real karate!

Next he states that Kise is upset with the Americans, etc., as they learn his karate, go to the States, or where ever, start up a dojo and do not send him money. Jerry stated that is why he does not teach them real karate any more. Now you would think by that statement, Kise was giving them his karate. Not that they paid him for it. Plus trained hard for their ranks.

It’s funny that it took this long for me to see the “Real Kise“. I have spent 40 plus years being loyal, defending him, honoring and respecting him. However I have reached the stage as many others, that he is about money and nothing else. His principles, his values and honor are a thing of the past. I’m finished with the new Kise. I only want to remember the Kise of old.

In closing; To any and all former or future students, Beware! Money is the only driving factor. If you are not giving him money…. he has no use whatsoever for you, past or present. He and Isao both are about nothing but money.