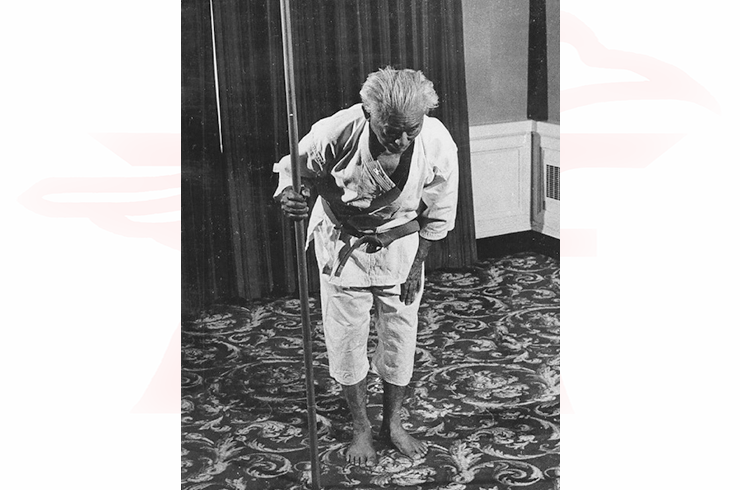 I first met Sensei Hohan Soken in December of 1961.  I was taken to meet Soken at his dojo/home in Grand Master Hohan Soken in Okinawa in 1961, with Fusei Kise his student and a Yon Dan at this time; James H. Coffman, his first American Black Belt student, began his studies with Master Soken in December of 1961.

Okinawa by Fusei Kise.  His home was a small wooden house with a dojo attached.  The dojo was small about 8′ X 10′ however all dojos were small in Okinawa.  Soken also had a dirt/mud backyard we would work out in during the good weather.  Kise had been training with Soken for a number of years and he had told Soken about me and requested that Soken see me and evaluate my capabilities and to see if he wanted me as a student.

The first meeting was only talking to the master and drinking tea.  We talked about karate.  Why did I want to train in Karate?  Was I ready to give the time and devotion needed to train properly?  What did I think of Sensei Kise?  What did I think of other styles of karate?  After all these questions he asked me to do my favorite kata.  I ask my teacher what kata he wanted me to do?  He replied do “Seisan”, after Seisan, he asked me to do a weapon kata. I performed a Bo kata.  Master Soken talked to Kise and not to me.  I could only speak a small amount of Japanese and he could not speak any English.  So all our conversation went through Kise.  Kise could not speak English very well at that time but because I worked with him all day and trained with him during the night we could understand each other.  Soken asked how long I had been training with Kise?  I told him a year or so. He asked how many days a week I trained with Kise, I told him every day.  I told him that I loved karate and was willing to apply as much time as was needed, Soken laughed and said karate was a way of life if one wanted to get good he would have to practice every day for many, many years and even then you might not be very good.  He said not everyone that trained, trained correctly and that not everyone could excel to a high level.  Then he asked me why did I want to train under him?  I told him that Kise was my teacher and Kise told me that you were a Master of  Masters. And Kise thought that I should study your karate, that was all that needed to be said, for he was my teacher and a good student does what his teacher tells him to do.  Soken seemed to like my answer. 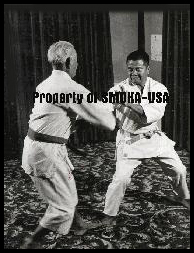 Soken told me that Kise had talked to him about me for a couple of months and he had finally agreed to see me. He said he only had a few students and they were all Okinawans, he agreed to accept me as his student. I did not know anything about this great man, all I knew was that my teacher thought he was very special. I had already met three or four Ju-Dan (10th Dan) by this time.ie. Nakamura, Nagamine and the Shimabukuro brothers. I had never seen any of them do anything other than teaching a class by watching the students or directing the senior ranks. The most they would do is correct a hand, arm or leg position and then sit and observe the class or officiate at the different shi-I’s (inter dojo mini-tournament) and testings.

So I didn’t know who Sensei Soken really was. I was to find out later that he was a teacher of teachers and that he was very highly respected on the Island by the other high ranking teachers. I then felt very privileged. The classes were to be just sensei Kise and I each week for an hour or two. That’s when I found out that this little old man could really hurt you, I would watch him strike Kise and see the pain on Kise’s face. This was really when I truly found a real respect for Soken. I had never seen Kise get hurt so easy before, he was always the one doing the hurting to other people, not the one getting hurt.

Soken never really hurt me, I don’t know why? I guess he felt that would come later! We would train in kata up to my rank. 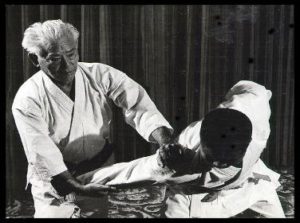 Soken loved the weapons, he was excellent with everything he picked up. He particularly liked the “kama” and “Bo”. I was getting good with the Bo, so we spent a lot of time training with the weapons. Sometimes Kise would bring another Okinawan from his Old Koza dojo to Soken’s. Sometimes some of Soken’s students were there. I remember seeing Soken fight with his students, he was something to see, he always made it look so easy. Soken students wore only two colors of belts, either white or Black, no other colors were ever worn by his students, there were no in-between colors. When you worked out with one of his white belts, you had no idea what his real rank was or how long he had been training under Soken. They could have been ready for their Black belt test, you never knew. They might have been at the green belt or brown belt level, you just never knew, so if you worked with one of them you always had to be on your toes at all times.

Sensei Soken was a teacher that wanted perfection at all times, he stressed kata highly and he liked body change drills, as well as body conditioning. Often Soken would say you looked good but you need more practice. He never said you were sloppy, for if you didn’t train hard each and every day he wanted nothing to do with you. He only wanted very disciplined students that were willing to live up to what he expected. His self-defense and fighting principles were some of the best I have ever seen on Okinawa, he would stress that this technique was good for a small man, not necessarily good for a heavy man, then he would show you why it worked better for a small man. He would then show the same technique for the heavy or taller man but applied differently.

Soken Sensei never charged me for the lessons I received. From time to time we would go out to eat at a local restaurant, it, of course, was my treat. For the most part, we always talked about karate. Kise and Soken would talk about misc. things such as how was Isao (Kise’s son), Kise’s dojo, some of the other students, mostly small talk. I went on to train with Master Soken throughout the remaining 2 1/2 years I was stationed on Okinawa.