George Dillman:   This man is a total joke stealing money from those that are stupid enough to believe his nonsense.  See latest info on Dillman: Phoney watch more on youtube.com 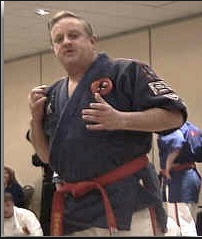 On June 26, 2002 I called George Dillman and asked why he claims to have studied under Fusei Kise and Hohan Soken.

George said that he never claimed to have been a student under either one, but that he did have a private, three-hour lesson (total lie) with Soken in his hotel room after the Premru karate tournament was over in Philadelphia, Pennsylvania, in 1972. Now, why would Grand Master Hohan Soken grant a “no body” like George Dillman a three hour private lesson?  the answer: of course he would not.  Dillman said he would run through a kata, than Soken would. They each did three kata, George said. What impressed him the most, he said, was that Soken did not even break a sweat during or after completing his kata. Kise, he said, never impressed him.

1) There were no eyewitnesses other than Soken, Kise and Dillman. Dillman’s wife (at the time) Kim, says that she and some of their students waited in their hotel room for George to finish his meeting with Soken and Kise. Soken, as we all know, has passed away. That leaves Kise and George to verify his story. And Kise says that this private lesson never happened.  I’ve asked Kise several times and Kise always says: “George Dillman never had a private lesson with either me or Soken.”

2) Why would a Grand Master like Soken, or any other true Grand Master grant a private lesson of any length to a man that he has never trained, seen or met before?   He would not have!

3) As anyone who was there during Soken’s first and only visit to the U.S. in 1972 knows, Soken became very sick during his stay before the tournament and had to leave for Okinawa within a couple of days after. Again, why would a Grand Master give an unknown person a private lesson while he was sick? Answer:  He wouldn’t and he didn’t!

4) Why would Soken demonstrate kata for George Dillman in the first place? I don’t believe he would have. If you went up to Soken or any Grand Master and asked him to do a private kata demonstration in his hotel room, would he?   Answer:  Of course not!

5) Why would demonstrating six kata, three by Dillman, three by Soken, take three hours?  It wouldn’t!  What was the supposed kata that Dillman did for a Grand Master?  This is so laughable, it would take a complete idiot to believe it.

6) Why would a Grand Master get up and do kata for a nobody when he had his protégé and senior student, Fusei Kise, beside him at all times?   He would never have done it.  If it were to be done?  and I say again “IF”, it would have been his protege` (Fusei Kise) doing the kata, not Hohan Soken.  Again, Kise says it did not happen.

The next lie out of Dillman’s mouth will be Kise was not there, only he and Soken were there.  Now we all know Kise would not leave Soken’s side during the whole trip.  So that would be another lie.

My real question is this: Could George Dillman have gotten his story mixed up?  Like 95% of all his stories, fabricated and made up.

In fact, this is what happened: After the tournament, myself, Kise, Dillman, Bob Peters and a few others met together with Soken and Kise in his hotel room for a few hours. We discussed karate, Okinawa, etc. There, Soken and Kise gave out weapons they’d brought from Okinawa as gifts to us; I picked a set of sai; George was given a set of tonfa.  Perhaps this is where the real meeting came from.  Could it be Dillmans mixed up ego got into his want to be fantasy, thinking that no one would dispute him or prove him to be a liar.   Wrong again Groege!

Dillman, in fact, never studied under or with Hohan Soken or Fusei Kise and never had a private lesson in any form whatsoever.  True FACT!