I (James H. Coffman) Jimmy, met Sensei Kise in 1960 when I was stationed on

Okinawa. I was an electrician, stationed on Kadena AFB.  Kise was a civilian working also as an electrician.  My first work assignment was to be Kise’s helper and driver on base.

During the first four hours of the workday, I don’t think Kise said ten words to me. During the lunch break one of my co-workers told me to go over and slap that small Okinawan. I asked “which small Okinawan”? The little guy, named Kise. I asked why? I was then told that Kise was a Karate instructor. When we (Kise and I) went back to work and were driving to the next job, I asked Kise if he was in fact, a karate instructor? Once I said the word KARATE, the floodgates opened. Kise asked if I liked karate? I asked him if he could break a brick; he laughed and said yes. I said he would have to show me before I would believe him. We picked up his friend, Miyazato, another Okinawan electrician and life-long friend of Kise’s and drove out to the officers housing area where we found a flower bed with bricks half buried in the ground. I ran over and pulled up one of the bricks. We then drove to my barracks, where I picked up my camera. Next it was out to an area where we could do the photo. Kise broke the brick with his bare hand and I was totally hooked.

I attended Kise’s class that night. Kise at the time lived in a bad area of Old Koza, his dojo was the back part of his home. His teacher, Maishiro , a Hachi-Dan, ( 8th degree black belt belt) was his neighbor, who lived so close that you could reach out of the dojo window and touch Maishiro’s home.

The karate class consisted of five or six Okinawan students and myself.  The dojo was a small rectangular space of about 8 to 10 ft. wide and about fifteen to twenty feet long.  Class started with the formal bowing to Kise, the teacher.  Maishiro was not there at my first few classes, however, he would look in from time to time, (Maishiro was Kise’s teacher for most of the classes).  Then we did exercises, next blocking drills, then kata training.  After kata, we went into KORTE (body conditioning) finishing with fighting.  Kise didn’t have me fight the first few nights.  Our class only had one other black belt, his name was “Miagi”; he was the karate teacher at his local high school;  this guy was good.  He would sweat his gi top, belt, and half his gi pants completely each class; a real hard worker.  We all sweated like pigs, it was very hot, no a/c, or fans.  The Okinawans, for the most part, didn’t like Americans–they viewed us as outsiders so they were very hard on me.  You had to earn their respect.  Classes would last around three hours, however, most stayed an hour to two after class to practice.  Kise was a very hardcore and strong karate teacher.  He was hard and very well conditioned.  I remember saying it was like kicking a fire hydrant, because, when he blocked you, it felt like a piece of steel hitting your leg or arms.  Kise always did what the class did.  Some nights all he wanted to work on was the legs.  We would do thousands and thousands of kicks of any and all combinations.  Some other nights it would be body conditioning.  That was when we all wished we had stayed home.

Kise was known as a very strong fighter, having seen him fight for real many times, one was smart to avoid him.  Other karate men would come to his dojo and challenge him to a fight.  He would have us all leave the dojo, stand outside and he would close all the doors and windows.  The next thing you heard was fighting noises, then out would come Kise.  He would go around to the back of his house and cool down.  We students would go back into the Dojo and drag out, most of the time, an unconscious person, and deposit them in the street, we then would start training again as if nothing had happened.  Kise would come back after about one-half hour later and resume teaching class.  You did not want to be the one working with him at this time because he would always hurt the one he was working with after being in a fight.  I guess he was still keyed-up.  Kise was a man of about 5’2″ +, weighing about 135 lbs at best. And as hard as nails, a fourth-degree Black belt at this time.  We trained seven days a, every day and every night from that first night on.  A lot of body conditioning, tens of thousands of kicks, blocks, and punches.  Once you reached Black belt, you were expected to outdo any and all lower ranks, such as, when the class did twenty squat jump-kicks, the black belts had to do at least ten more. I remember seeing students throwing up, holding their legs when they would cramp up, etc.

I remember the classes at the Zempke gym and the Schilling center classes having as many as up to sixty-five students in the class.  At the end of the classes, we had to do Korte training and arm conditioning.  The black belts had to start with the highest ranks, giving and getting ten chops to the arms, and working down to the lowest rank, after about a years worth of conditioning and training in Korte, I could strike a large mans arm and make him fall to his knees. It became fun
after we had reached that level.”

Fighting was always full contact, we all wore Bogosuki (body armor) every class.  The class was exercises, kata, fighting techniques, korte training and fighting every class.  The Schilling center classes were taught outside on the concrete patio most of the time, which would play hell on your bare feet until they got used to the concrete flooring.  You would develop blisters on your feet until you become conditioned.  Classes would be indoors on rainy days.  Kise was right there doing each and everything the students did.  Kise became my complete idol.  I was to copy his every mannerism and every way.  People started calling me “Little Kise”, for when you saw him, you saw me.

Kise and I would go to each of the different Karate Dojo’s throughout the Island.   He would tell me to watch the instructors and their system, looking for weak spots.  Any of the senior ranking teachers, Hachi-Dan and above, Kise would know on a personal basis, for they all knew of him and of his ability in Karate.  This type of thing went on the whole time I was on Okinawa.

My reputation became stronger and stronger.  I became a constant winner for Sensei Kise; a showpiece, if you will.  I was, and still am today, well remembered and known in Okinawa. 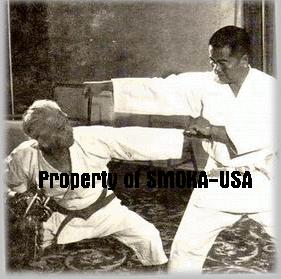 In 1972 Kise and I once again united.  I found that Kise had indeed changed, from being the hot head I knew while on Okinawa, to that of a businessman.  Kise’s main line of thought was now the building of a large Association, not that of building a reputation as a bad ass on Okinawa in Karate.  He had also put on weight.  He would tell me that I was teaching too hard and that it would lead to the loss of students.  At this time I was making my living off of Karate.  I had a Dojo that was over 5,000 sq. foot (75′ X 75′).  I had over 100 students in the main dojo including the children, that was located in Silver Spring, Maryland, and another 50-100 students at the other locations that I was teaching. (second dojo Rockville, churches, and community centers.  Kise once again impressed me with his great ability with the weapons.  His skill level is very high; he truly is a master.  His thirst for knowledge is relentless.  I found that he was very selective as to the information he would now give out to the students.  I got the feeling that he did not trust the Americans anymore, the way he used to.  I think he feels betrayed by us in that we all take the knowledge from him and promise to bring him to the States, etc. but never truly do so.  The old “once burned, twice shy”.

Once Kise and I broke apart as teacher/student, (1977-8) I felt his Karate changed from being based on the real to that of just money making.  He also had two children going to college, which he had to pay for, a possible excuse.  The only income was through his Karate, so I think this was another reason for the change.  Kise and I parted because he wanted me to give out high ranks (3rd Dan and up) without ever seeing what true level the person’s skill was and I had to sign the certificate authorizing each rank, in his name.  He would say, what difference is it to you, they cannot beat you, or me, just take their money, it is good for the Association.  He also wanted me to send all of the money to Okinawa, not hold operation expenses or ticket money for his next trip to the States.

No matter what Master Kise thinks about me, he will forever remain my teacher and continue to have my utmost respect.  I may not agree with how or what he teaches, but one does not forget real training.  Kise holds a wealth of knowledge, one only needs to tap into that wealth of knowledge.  I was told by Kise, back in 1961, that I would never be able to learn 100% of the system, for I was not Okinawan, however, I could learn up to 75% if I worked hard enough. I truly believe that Kise will never again teach a non-Okinawan his vast amount of knowledge and skills that he possesses. I was one of the lucky ones, fo I received much more than most that ever trained with Fusei Kise.